LIVE MUSIC FOR CHILDREN IN NEED

OUR STORY - "THE POWER OF A SONG AND A SMILE"
Back in 1961 a five year old boy could never have imagined that a moment at such an early age could shape the future of his life... That day began Michael Aloi's passionate jouney in life that has led him to Songs for Smiles... I will never forget that day I packed my accordion and prepared my music/comedy act to perform for the seniors at the geriatric unit of The Grasslands Hospital in Valhalla, NY. I vividly remember those moments for one powerful reason...the music seemed to transform those patients into kids again. Their smiles will always be indelibly etched in my memory. There were many occasions growing up when I surely wanted to quit my music lessons but the joy that I saw I could bring others in need was more than enough reason to continue.

As I continued my music through the years including a well established professional music career I never stopped looking for opportunities to perform benefit concerts for those that needed a smile in their life. I began to realize that for all of the thousands I performed for on a professional level there was no greater satisfaction than what I received at those benefits. It was at those shows that I discovered the true power of music. Soon the Benefit shows outnumbered the paying gigs and I was performing shows for Make-A-Wish Foundation, rehabilitation centers, and that most dear to my heart, children's hospitals and clinics.

My professional musical focus started to shift to children's music and I was fortunate to have a second successful career as a children's music artist. The pivotal realization that this was my path in life occurred four years ago when I started performing weekly concerts at the Maria Fareri Hospital. serendipitously, less than 1000 feet from where I first performed in 1961!

The only problem I had was that there wasn't enough time to spread the smiles. If I could only clone myself?... And then it hit me one day while on the beach in Ocean City, NJ when child smiled at me during my morning jog. ...that maybe I just could! I had the skills, the experience and insights that could possibly make it happen.

What if I could duplicate this model across the United States giving other musicians the opportunity to participate in this life changing experience while spreading the smiles as it grew? This thought fueled the fire in my heart to form SongsForSmiles to launch this dream into a reality. I have constructed a model and a plan to make this work.

The drive that keeps me going are those moments that I will never forget like the mom who told me her child's first words ever was at one of my shows as a 5 year old!... or the little boy with limited arm movement.. that I hesitated to play "if your happy and you know it clap your hands" only to witness the little boy next to him hold out a tambourine to his 3 yr old friend, letting him know someone would always be there to assist, as the 2 boys, together. "clapped" the tambourine to the beat of the song! ....or the boy with cancer who stayed after one of my shows with his guitar as he discussed how as soon as his "minor inconvenience", as he put it, was out of the way, music would once again be a part of his life to spread joy to others as I was doing... Or how physically and mentality challenged kids somehow managed to get up and dance at my shows despite many obstacles... And to the parents that have told me over and over again what a great joy it was to see their child smile again as they hadn't seen that in weeks or months and many saying that it gave them hope... For these songs for smiles are not only for the children but for their parents as well... For in seeing their child smile .., If even for a brief moment, brings smiles to their faces and a positive into their day of doubts.

There are 1000's of musicians across the United States that with the right coordination and effort can potentially do the same for millions of children and this self perpetuating process can continue on long into the future.

It is my goal to follow that passion and to make that dream become a reality!

Michael
Poster for my first show in 1961 at Grasslands Hospital when I was 5 years old... Still have it hanging in my office. That's me on the bottom... Little Mike - The Entertainer! 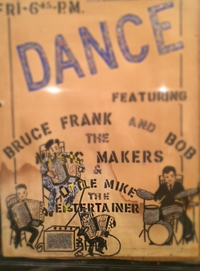 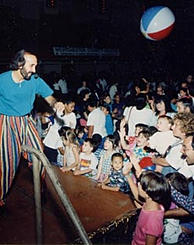